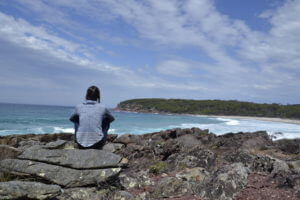 After my accident in Borneo, we were forced to change our plans. Instead of going to the Philippines, we returned to Sydney to stay again with Nat and Pat (we told you we would be back sooner than later!). We had planned a road trip from Sydney along the South Coast of NSW to Melbourne and the Great Ocean Road for January, so we decided to switch plans and travel in Australia now and go to the Philippines in March/April after … END_OF_DOCUMENT_TOKEN_TO_BE_REPLACED

When planning a road trip down the Sapphire Coast, make sure to go between September and late November. At this time of the year, the humpback whales are migrating to the colder waters in the South and can be seen from a lot of places along the coast of New South Wales. Here are some of our favourite lookouts, from where we spotted whales. Narooma Lookout We had the first whales sightings on our trip to the lookout in Narooma. A lot of … END_OF_DOCUMENT_TOKEN_TO_BE_REPLACED

Australia might be one of the best - if not the best place for road trips. With their well-maintained highways and easy ways to avoid the tolls, there is nothing better than hopping in a car and hitting the road. If only there wouldn’t be the problem of the high accommodation costs. When we looked up possible campsites for our trip from Sydney to Melbourne, we were quite shocked, the cheapest places we found were 24 AUD and the most expensive … END_OF_DOCUMENT_TOKEN_TO_BE_REPLACED